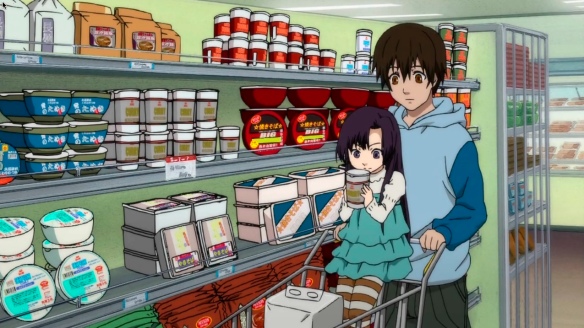 Based on a light novel series this show is about Kurenai Shinkurou a 16 year old high school student in a modern day japan. Shinkuro has been trained in martial arts and works as a mediator sent to resolve disputes. The series revolves around 1 job where he is to protect a young girl of an influential family. Director Kou Matsuo is most notable for directing the Rozen Maiden series.

This show was not what I had expected, it is very much a comedy as it is an action drama. The twelve episodes keep the story flowing and highly compelling. It deals with the concept of growing up on two fronts with the two main characters which result in both humorous and dramatic outcomes.

I very much enjoyed the comedic moments of the show which encompass the issues that arise from a person that has been highly sheltered now forced to live in a relatively poor environment. The side characters are excellent providing variety in the comedic approaches. The show does a good job of characterization which allows it to be serious when it wants to.

This is very much an underrated show that would appeal to a wide range of anime fans. But be warned people who have no heart will not enjoy this show at all.

Currently not licensed in the US. Originally light novel, adapted into manga then anime