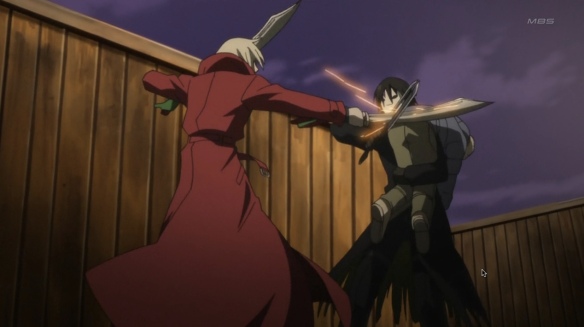 We get to see the opening credits for the first time and this season the song is “Tsukiakari no Michishirube” by Stereopony, Abingdon boys school gets demoted to the ending credits. One interesting clip in the OP is Suou with a long sniper rifle, this image by itself has me hooked to see how this is used.

Nika, another school friend of Suou, escapes from getting memory wiped, meets up with Suou for a while but then leaves to search for Tanya.

Both the Russian Army and CIA (who have hired Hei) are after Shion and the meteor fragment.

The magician shows and subsequently get taken down by Hei. His power is distorting the area around him and renumeration is telling people the secret behind a magic trick.

Another group appears consisting of a female contractor who is able materialise blades (renumeration is to kiss anyone) and a male contractor who can cover himself in heavy rock armor. Episode ends with this group trapping Hei in a special forcefield.