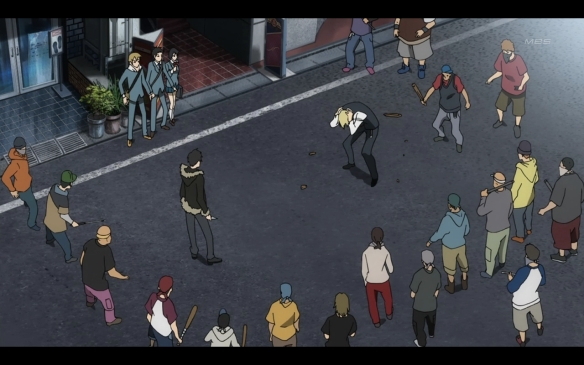 Durarara, one of the biggest new anime of 2010, is an action mystery set in the Tokyo city of Ikebukuro where a mysterious headless motocycle rider is heard blazing through the streets. The 24 episode show has two different arcs, the first half is a mystery surrounding the Dullahan (a celtic myth of a headless knight riding a horse with their head under an arm) who is looking to find her missing head. The second half is a tale of gang warfare in the fictionalized Ikebukuro with the same cast of characters who aren’t what they seem when initially introduced.

Brain’s Base has produced few shows that interest me, but when combined with Omori they have an excellent track record. Together they put out the unique crime tale Bacano! which is a personal favourite of mine as well as other well received shows such as Natsume Yujin-Cho and most recently Kuragehime. He was also, strangely enough, the director of Koi Kaze which seemed to be well liked by fans of the genre but that genre is incest romance, definitely not a show I had any interest in. Anyway the point is that anything Omori does is well made and tries to do something interesting.

One of Baccano’s strong points was its action scenes, this carries on to Durarara which has some interesting and unconventional action moments. Some of the characters have supernatural powers and the way they fight are much more than the typical brawl. Another strong point of Omori’s works are the characters and in Durarara the strong points are the side characters ranging from the Celty the Dullahan, a black market doctor, a super human bartender, an information dealer and even a friendly russian sushi chef. However some might say that the main characters, who are a bunch of high school kids, are dull but as things progress their characters get more interesting.

Another positive point is the music which is appropriate in adding to the atmosphere of the scenes and didn’t seem repetitive. The animation is also sharp and fluid completing the whole package.

Durarara is an excellent show that deserves to do well in the the upcoming US DVD release (25th January). There are so few anime (2 or 3 a year) that appeal to my sort of tastes and I’m just glad this was made and was actually done well.